What is the SubDomain Modeling (SDM) method?

This article is dedicated to the general presentation of the electromagnetic SubDomain Model (SDM) available in MANATEE.

The SubDomain Method or SubDomain Model (SDM), also called Fourier-based Model or Harmonic Model, is a semi-analytical method which has been intially developed to compute the two-dimensional (radial & tangential) air gap flux density in electrical machines. Other machine characteristics can be deduced from the air gap flux density such as electromagnetic torque, electromotive force, magnetic losses, Maxwell forces for noise and vibrations analysis.

In MANATEE, the subdomain method is available for the following topologies:

An accurate and fast method

Three different topologies have been studied to illustrate SDM’s computational efficiency in comparison with FEA, as both methods are included in MANATEE :

The finite element mesh is represented as well as the number of periodicity for each topology:

Both elements and air gap harmonics numbers are automatically chosen by MANATEE to optimize the accuracy versus computation time ratio. (See How to set the harmonic number in the different subdomains ?) 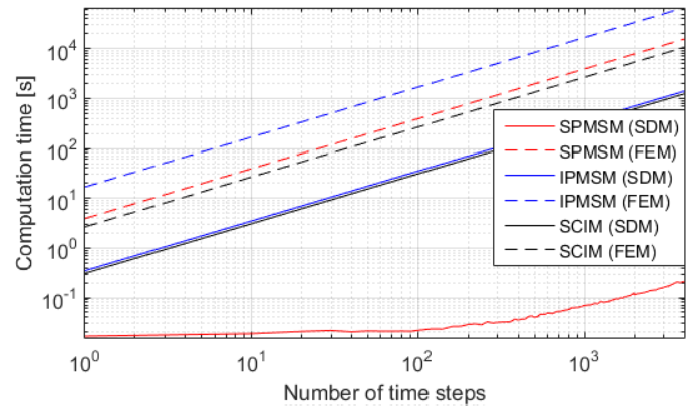 It can be seen that the subdomain method is always faster than FEA, especially for the SPMSM because a single system resolution is needed. For machine with double saliency (slots at stator and rotor sides), the computation time increases linearly in function of the number of time steps because there is one system resolution per time step (as for the FEM).

The subdomain method is based on the analytical resolution of Maxwell equations, which is possible under several assumptions [[B. L. J. Gysen, K. J. Meessen, J. J. H. Paulides, and E. A. Lomonova, “General Formulation of the Electromagnetic Field Distribution in Machines and Devices Using Fourier Analysis,” IEEE Trans. Magn., vol. 46, no. 1, pp. 39–52, 2010.]]:

Here is for example a subdomain model of a Surface-mounted Permanent Magnet Synchronous Machine (SPMSM) with 12 stator slots and 8 poles: 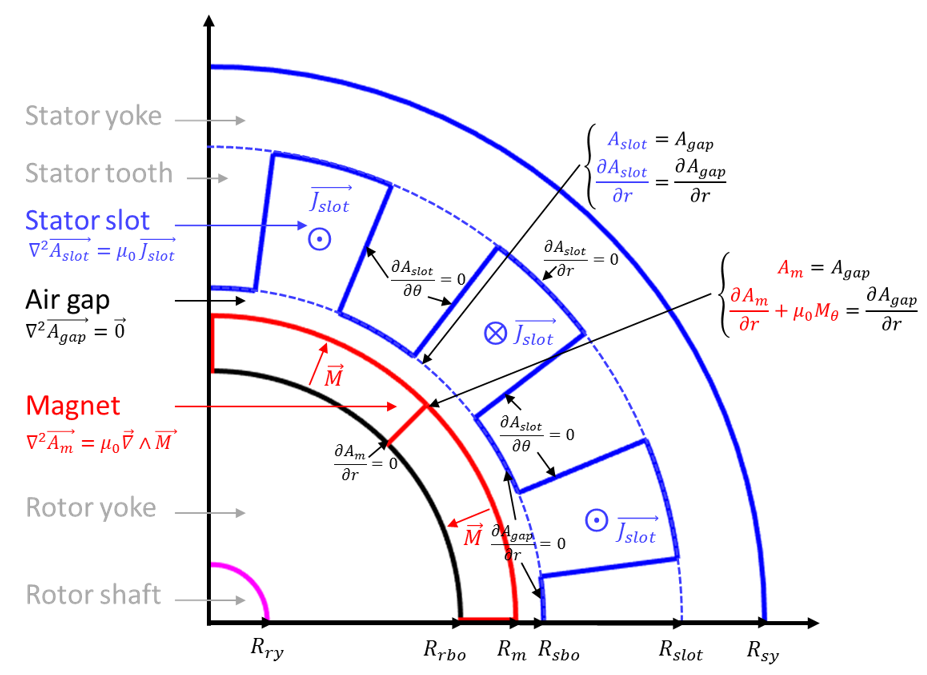 In this example, the model is divided into:

The resulting differential equations are Poisson’s equations in magnets and stator slots subdomains and Laplace’s Equation in the air gap (Step 1). Each differential equation is subject to the external iron boundary conditions represented on the figure above (i.e all equations with a null potential derivative). These iron boundary conditions enables to find an analytical solution using the separation of variables technique (Step 2 and 3). This potential solution is expressed as a Fourier series whose coefficients still depend on one or several integration constants. These integration constants are determined by applying the potential and tangential field continuity equations between the adjacent subdomains (Step 4).

There is one equation per harmonic rank and per integration constant, meaning that the system solve grows linearly with : (the number of subdomains)x(the number of harmonic considered in each subdomain) (see the Howto on the harmonic numbers computation). The resulting equation set is put under matrix form and is numerically solved (Step 5). Then, the flux density distribution is obtained by evaluating the Fourier series with the resulting integration constants values (Step 6). Others post-processings such as torque or Maxwell forces computation are made depending on the simulation project parameters (Step 7). 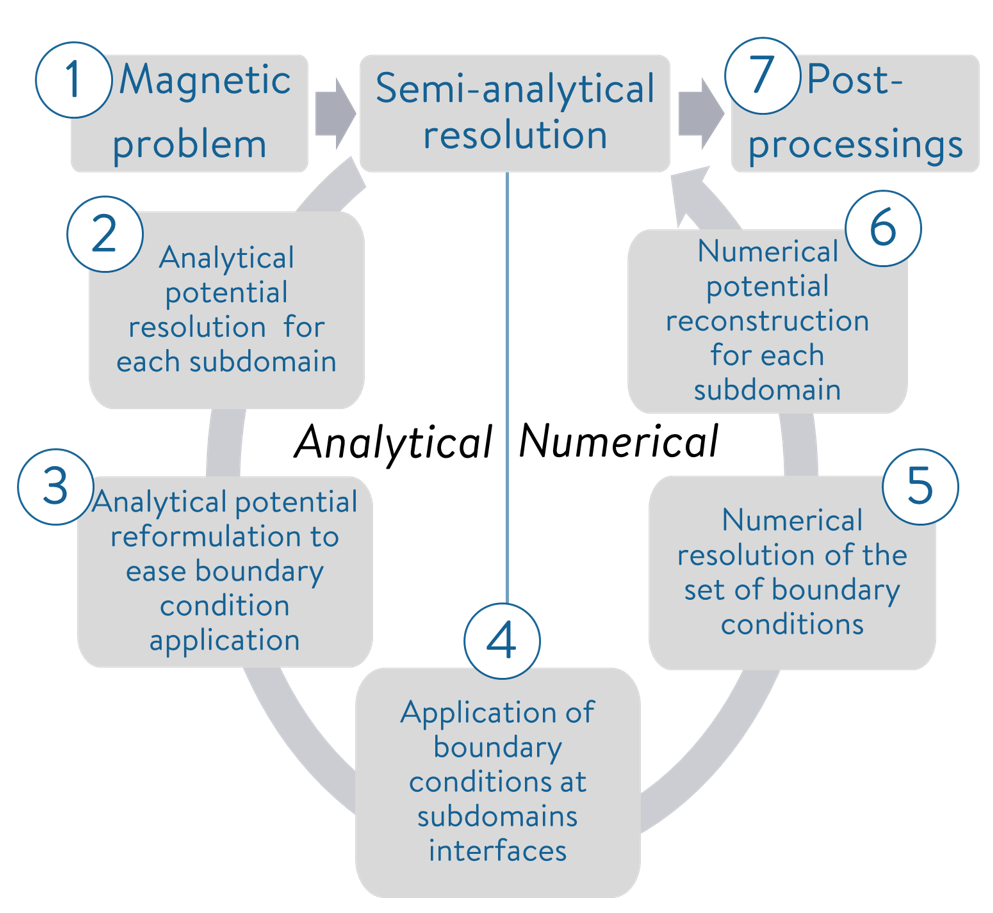 The air gap flux density is computed for this particular SPMSM under load operation and plotted using the plot_B_space command: 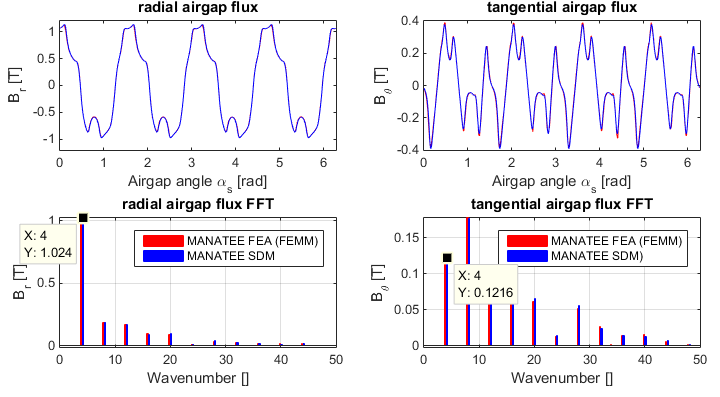 It shows that FEA and SDM results are almost the same, however the flux density is computed for 2000 time steps in less than a second with SDM, which is equivalent to a single time step using Finite Element Analysis. The MANATEE subdomain method is validated for numerous cases found in the litterature and shown on the validation part of the website.

The field lines and flux density can be plotted in each subdomain using plot_B_animate_SDM2D command: 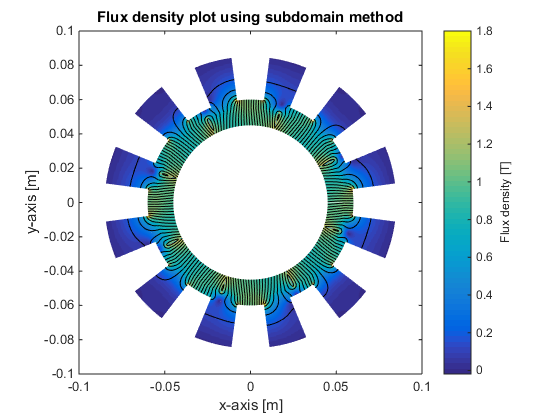 It can be seen that the flux lines enter perpendicularly into the iron parts, due to the infinite permeability assumption.